Armed conflicts have evolved in the past several decades. Traditional inter-state wars have become intra-state, asymmetrical conflicts. These conflicts are often encouraged-by actors who are active in the international networks of illegal arms trade/smuggling.

Armed violence reduction is an integral part of the concept of human security, and humanitarian care for life and suffering of human beings exposed to the destruction of war resulted in various bans for production, stockpiling and use of certain types of arms. Over the past years, international conventions which ban production, stockpiling and use of chemical, gas and bacteriological weapons have been drafted, and a significant number of partnerships have been forged aiming to regulate production and improvements of nuclear weapons. In addition to control, production and bans on the use of weapons of mass destruction, there is an increased interest in control, production and use of conventional weapons which may injure or maim civilians. The Ottawa Treaty from 1997 (Lesson 01 02) on anti-personnel landmines is one of the best examples of these efforts. Actually, the human security approach was used to mobilise support for this type of arms control and represented an early example of human security policy at the international level. 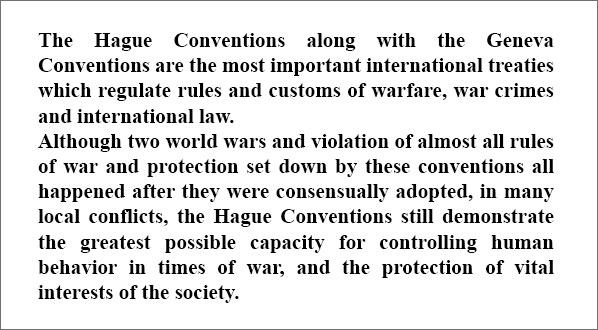 The concept of human security was successfully incorporated into arms control through various processes involving small arms control, landmines and cluster munitions, which paved the way for its incorporation into the latest arms trade convention. The new UN Arms Trade Treaty (ATT), which was adopted by the General Assembly in 2013, and came into force in December 2014, offers hope for further reduction in armed violence against civilians which would be accompanied by a positive effect on standard of living healthcare and education. All signatories of the treaty are obligated to conduct a comprehensive risk assessment procedure before approving export of weapons. This means that they must evaluate whether there is potential for violation of international human rights law or international humanitarian law. Signatories of the treaty are expected to prevent trade of weapons which support terrorism, organized crime, gender based violence or violence against children.

ATT has the potential to advance human security by improving responsibility and transparency in international control of arms trade. This way, the treaty aims to create a safer environment for all those living under the threat of violence. If the treaty is widely accepted and implemented, its impact on improving human security through reducing irresponsible transfers of arms should become visible by 2020.

A dramatic increase in small arms proliferation is especially present in the post-Cold War era and in Western Balkans and the wider region. Wars in the 1990s in ex-Yugoslavia imposed the presence of international forces as an important support element for post-conflict recovery, state-building and activities related to small arms control in this region. Newly emerged states in the region, have been coping with conflict legacies through processes of demobilization and reintegration of former combatants, establishment of the legal framework for small arms tracing, marking and transfer of small arms, control over civilian possession and use, destruction of surplus ammunition and weapons, etc. (Đurđević Lukić, 2015).

On this subject, it is important to mention numerous campaigns conducted in Western Balkan countries for arms legalization and reduction. Illegal trade and possession of a large number of small arms is a huge barrier to security and an incentive for criminal activities. The publication “Targeting Weapons” – Misuse of Firearms in Serbia states that collection campaigns targeting illegal weapons were organized in Western Balkan countries on several occasions in the context of the demobilization of paramilitary groups after the most recent conflicts in the region. These actions included amnesty – and occasionally additional incentives, such as direct money remuneration, i.e. buy-back, lottery tickets for individuals who surrender weapons (with prizes such as household appliances or cars), or development incentives for communities who surrender a significant amount of illegal weapons (“weapons for development”). The results of these actions differed considerably, and the quantities of illegal weapons in the region required collection campaigns to be repeated periodically. Thus, such campaigns were conducted in Serbia on multiple occasions, in 1992, 1997, 1999, 2003, and 2007. On 20 February 2015, the Serbian Parliament adopted the new Law on Weapons and Ammunition, which regulates the acquisition, possession, carrying, collection, repair, modification, brokering, and transport of weapons and ammunition. The licensing procedure was particularly improved and a three-month campaign was proposed (4 March – 4 June 2015) for surrender of illegal weapons and ammunition, without providing any proof of origin and without being subjected to any sanctions (Đurđević Lukić, 2015).

Campaigns to legalize arms are supported by the EU through the South Eastern and Eastern Europe Clearinghouse for the Control of the Small Arms and Light Weapons (SEESAC). SEESAC cites that since 2002, with the support of the EU, it managed to reduce the quantity of unwanted and surplus light weapons and ammunition in the region by about 300,000 pieces. Since then, SEESAC has been working to strengthen safety and security through regional cooperation in South Eastern Europe. One of the most significant achievements is the development of regional micro-disarmament standards and guidelines (RMDS/G) which include operational procedures, practices and norms for control of light weapons and serve as the basis International standards for control of small arms. SEESAC supported the establishment of national Small Arms and Light Weapons Commissions in SEE countries which share information and expertise; they also use the same standards for reporting and monitoring activities related to light weapons in their countries (www.seesac.org).

A particularly interesting issue for research in the Balkan region is the perceptions and views young people have with regard to light weapons, and according to Svetlana Đurđević Lukić, young people have an alarming familiarity with firearms and motivations for carrying a weapon: improved self-image; traditional values and fear from threats, for revenge, etc.

According to records from the Serbian Ministry of Internal Affairs (MUP) for 2013, 3,026 persons aged between 18 and 30 have been found to possess 4,093 firearms. No precise data is available for unregistered firearms. In 2013, criminal charges were filed against young people for 500 counts of the offence “Unauthorized manufacture, possession carrying or trade of firearms and explosive substances” pursuant to article 348 of the Criminal Code and misdemeanor charges for 1,240 counts of the offence pursuant to Article 35 of the Law on Weapons and Ammunition (MUP RS, 2014).

An interesting project, “Targeting Weapons”, a campaign by the South Eastern and Eastern Europe Clearinghouse for the Control of Small Arms and Light Weapons (UNDP/SEESAC) has been running since its launch in 2012. Widespread presence of legal and the availability of illegal small arms and light weapons in South Eastern Europe present a security risk for society, and is a threat to peace and sustainable development. At the same time, there is an assumption that the culture and tradition of using and carrying firearms in Serbia, which most of society supports, UNDP/SEESAC believes that this assumption should be tested. Using an Ushahidi platform, UNDP/SEESAC gives the citizens of Serbia the opportunity to express their views on guns, and become more actively involved in improving safety and security of Serbia and citizens. Via this website, citizens of Serbia can, easily and quickly, report sightings of weapons as well as express their views about gun culture in Serbia. Promotion of this platform through public messages, and through various media (social Internet groups, television, radio, text messages, and banners) will be key instruments for the development and success of this project.