Numerous initiatives launched by international, governmental and non-governmental organizations are making the concept of human security recognizable and are entrenching it firmly into public policies. These policies shape society and lives in order to achieve the highest possible level of safety, security and personal dignity. Human security is increasingly being adopted as a doctrine to guide foreign policies and international development assistance, as well as a policy tool for planning in the fields of security, development and humanitarian work.

Human security approaches and policies focus on the physical and material safety and dignity of people globally, and not on the military and strategic interests of individual states, which is the case with traditional security policies. Defending human life is more important than defending states and personal integrity is just as important as territorial integrity.

Wars between states are still a major global problem, and together with civil wars (intra-state conflicts), pose major threats to human security around the globe. Use of threat and force has not been reduced in international policies as the war in Syria shows. Additionally, human security is also increasingly threatened by disasters, state collapse and widespread human right abuses.

As human life and its protection is always the highest priority for people, human security policies place an emphasis on addressing a wide range of threats, on prevention, and lived experiences and a bottom-up approach rather than a focus on territory and elite agendas as in classic security. From the perspective of human security peace always comes before war, incentive for cooperation before armed conflict, and transparency and factual reporting on military operations should replace secrecy and propaganda when providing information.

Human security policies involve a much wider spectrum of actors who need to contribute to security. While military and police forces are the principal guarantee of security in the traditional approach, for human security policies, civil society is an important actor as well. Civil society, among other things, plays a part in arms control and may help bring about disarmament, as seen in disarmament programs “goods for weapons” in Central America, Eastern Europe and Africa, under the auspices of local non-governmental groups. Civil society plays a key role in promoting compliance with national laws, and in verification of international treaties (this is the case, for example, with conventions on the prohibition of the use of landmines), in generating information and a bottom up perspective and in improving the legitimacy and sustainability of policy responses.

The importance of human security policies is also reflected in seeking to bring together security and development. The development of a community plays an important role in supporting disarmament, removing incentives for violence and criminalised economy, and when striving for security of a community, development is considered at the same time, as a way of ensuring peace. Conflict can be seen as ‘development in reverse’.

Threats to human security are interconnected and often produce a domino effect. For example, violent conflicts often arise out of marginalization, deprivation and poverty and in turn can lead to resource depletion, infectious diseases, education deficits, etc. Also, threats cannot be contained within a given country or area but can spread into a wider region and have negative impacts on regional and international security. Therefore, human security involves a comprehensive approach, emphasizing both multiple sources of insecurity faced by individuals and groups, and the need for cooperative and multi-sectoral responses, and which brings together various actors involved in development, security and human rights. 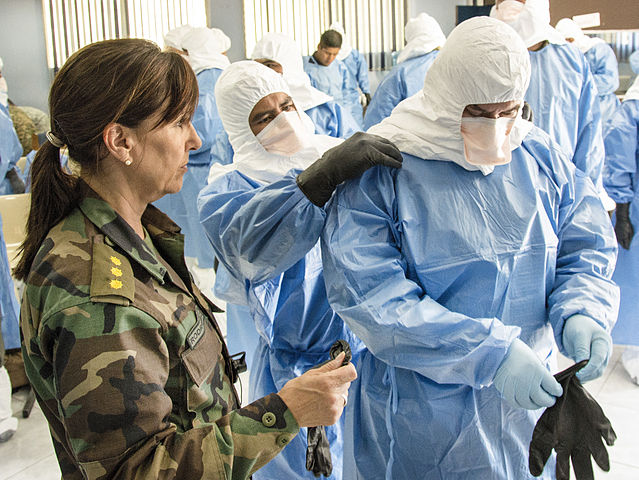 Human security has a double focus, concentrating on protection and empowerment. Protection implies a “top-down” approach. It is recognized that people face threats that are beyond their control (e.g., natural disasters, financial crises and conflicts), and human security therefore requires protecting people in a systematic, comprehensive and preventative way. States have the primary responsibility to implement such protective policies. However, international and regional organizations, the civil society and non-governmental actors as well as the private sector also play a role in protecting people from various sources of insecurity they are exposed to.

Empowerment implies a “bottom up” approach and aims to develop capabilities of individuals and communities to develop their full potential, to make appropriate decisions and find ways to participate in maintaining human security for themselves and others.

A good example of cooperation and joint multi-sectoral approaching solving the disarmament problem is the RECSA – an inter-governmental organization that coordinates the efforts of its Member States to combat the proliferation of small arms in the region. It was established in 2005 to oversee the implementation of the Nairobi Protocol for the Prevention, Control and Reduction of Small Arms and Light Weapons in the Great Lakes Region, the Horn of Africa and Bordering States in its Member States. From the original 11 countries that signed the Nairobi Protocol, member countries to RECSA have increased to 15, namely: Burundi, Central African Republic, Republic of Congo, Democratic Republic of Congo, Djibouti, Eritrea, Ethiopia, Kenya, Rwanda, Seychelles, Somalia, South Sudan, Sudan, Tanzania and Uganda.

As a key activity preceding disarmament, RECSA worked on raising awareness and educating the population and youth aiming to change their views on illegal possession of firearms, disarmament and to promote a culture of peace. Activities included organization of street marches, theatre plays, writing essays, youth competitions, broadcasting RECSA documentaries on national television, etc. Disarmament and voluntary surrender of illegal arms happened in Burundi, Kenya, Rwanda, Uganda and Tanzania. In Congo, the civil disarmament campaign ran in cooperation with the UNDP and other partners (MONUSCO, community leaders, the police and the military, civil society and the provincial parliamentary caucus), resulting in 70% of the population voluntarily surrendering arms. The campaign managed to collect21,099 pieces of small arms and light weapons. In return, those who voluntarily surrendered their weapons were given various goods, such as motorcycles, grinders, bicycles, bedding, mobile phones, hoes, soap, etc.(Information Brief on The Regional Centre on Small Arms and Light Weapons in the Great Lakes Region, the Horn of Africa and Bordering States (RECSA),2014)

From the perspective of the protection and empowerment framework, human security policies aim to identify problems in the existing security infrastructure and to find ways to relieve them. At the same time, a key feature of human security policies is that they are contextualised. They should recognise the specific nature of threats and possibilities for action. By encouraging participatory processes, the human security approach supports the development of a network of diverse actors and establishing formal mechanisms for their cooperation. This can enhance the dialogue between government institutions and citizens and lead to an increase in trust and greater civic engagement, as well as improve social cohesion.