As previously stated in Module 1, the concept of human security is very specific as it entails a change of perspective for understanding security. Traditional approaches viewed security primarily in terms of a distinction between domestic and external, and protection from foreign enemies, where the state is responsible for ensuring territorial sovereignty and integrity as well as internal stability – “security” generally meant the protection of the state from external attack, nuclear proliferation, international espionage and internal rebellion“(Owen, 2008: 36). Over the last several decades, this perspective has changed significantly, with attention focused on the harms to individuals and the way they perceive their own security (people-centered perspective). In addition to the micro level of analysis observed previously, the concept of human security focuses on subjective individual experiences at the micro level as well (Tadjbakhsh, 2005: 4).

The effect of this change is that the subject of analysis became much more complex, as it is now possible to observe more different aspects – factors which individuals consider to be important for their personal security may be numerous and diverse (they can vary between different societies, as well as within a single society). Module 1 already includes the definition of human security, established in 1994 in the UNDP Human Development Report (UNDP, 1994), where human security covers seven key categories: economic security, food security, health security, environmental security, personal security, community security, and political security. Each of these categories can be analyzed from many different aspects. In keeping with this broad definition, a wide range of methods may be used for analyzing human security, and they may significantly differ.

It is important to note two basic lines of differentiation here – the first one is the distinction between subjective and objective human security indicators, and the second is the difference between quantitative and qualitative methods which may be used for analysis. Objective indicators are usually considered to be “hard” indicators, and may relatively easily be quantified and provide opportunities for comparison at various levels of analysis (between states, regions, or time periods). For example, objective economic security indicators could include the average household income or indicators of (un)employment of population (rate of employment and unemployment, rate of informal unemployment…). On the other hand, subjective indicators target individual experiences, i.e. various aspects of personal feelings of security. The average income or employment rates are important indicators of the overall economic development of a country, but they cannot distinguish whether individual income is sufficient for fulfilling specific needs of the population, or whether having a job is a source of security for individuals or conversely a platform for various forms of insecurity which threaten individual security, i.e. their existence. Module 1 states that human security entails shifting from “the right to” to “the freedom from …”. In this particular case, this would mean that the focus shifts from the right to work to freedom from unemployment or freedom from deprivation.

Differentiating quantitative and qualitative methodological approaches which may be used for analyzing human security is closely related to this typology. The quantitative method is characterized by the endeavor to include as many units of analysis as possible, and to achieve the greatest possible degree of precision and systematization, aiming to provide data which can be comparable. Questionnaire surveys are the best known and the most prevalent example of the use of quantitative methodology. The qualitative methodological approach is based on the assumption that complex phenomena cannot be separated into independent parts, and aims therefore to describe the analyzed phenomenon in its entirety (is holistic in nature). Research which applies this approach is less structured and more flexible compared to research applying the quantitative approach. In addition, in qualitative research, respondents (subjects) are not selected at random, but always have specific characteristics which make them eligible for research, and investigation is usually performed on site (with subjects of analysis in their natural environment). Some techniques for collecting data for qualitative research include: case method, biographical method, in-depth interview, various forms of group interviews (e.g. focus groups)…

For researching human security as a complex phenomenon, it is useful to apply both subjective and objective indicators, as well as qualitative and quantitative methods, as using this approach enables us to have a comprehensive picture of the phenomenon we are investigating.

Objective and subjective poverty in Europe

The graph below represents a good example of differences between objective and subjective indicators. In EU Statistics on Income and Living Condition, the main indicator for measuring poverty is the At-risk-of-poverty-rate which is calculated based on total incomes of households. Households whose total incomes after social transfers are below 60% of median income in the country are considered as those that are at risk of poverty. In the same survey, there is also a subjective measure of poverty calculated based on the impression of household members that they cannot make ends meet. We can see that in better off countries, subjective poverty is less present than objective (Netherlands, Belgium), while in less developed countries there is a higher share of people who subjectively perceive exposure to poverty than there are those who are considered as objectively at risk of poverty (Greece, Bulgaria, Serbia). Only in Czech Republic are the two measures on the same level. 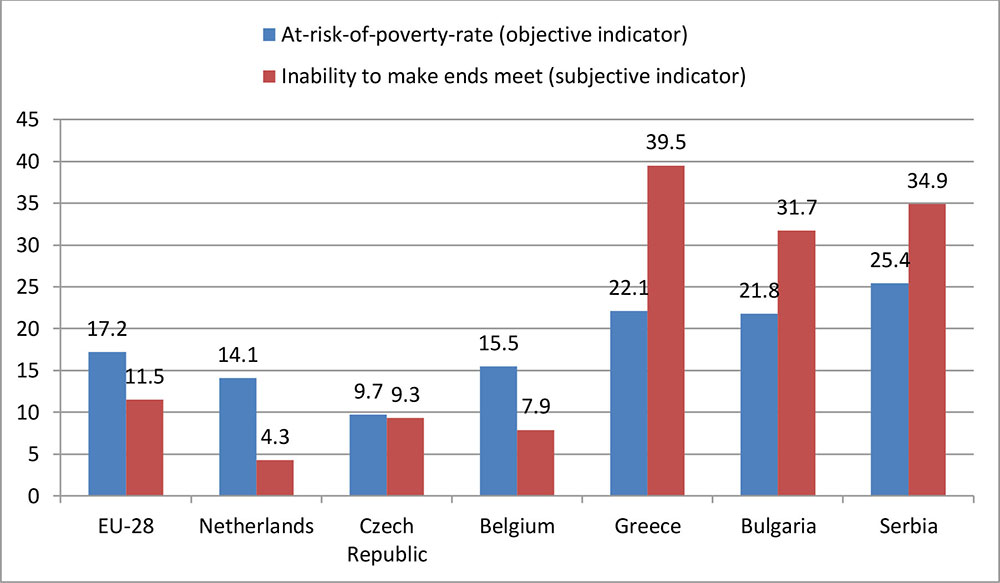 Finally, it is important to note that there are various types of discrepancies, and even contradictions, both with regard to the selection of methodology to be applied in human security research, and in defining the concept of human security itself.

When it comes to agreeing about defining the term or its subject scope, disagreements are most common among theoreticians who define this term in a more limited way and those who see it as a broader category. This is why the first main limitation or problem for researching human security is the inadequate definition of what human security includes (what it is) and what it does not include (what it is not); and also whether the research method favors objective over subjective indicators. For example, in a given population being studied, respondents may recognize physical violence as the strongest perceived threat, while statistics show that disease is a much greater threat for this population. This phenomenon in researching human security is what Owen Taylor called measurement contradiction.

Analysis of two aspects – real and perceived threats – requires them to be combined in order to produce a set of indicators to enable, first of all, changing measurements related to security over time, and secondly, to allow comparison between various locations. In some cases, socioeconomic risks can be measured using quantitative indicators, as well as environmental risks, but when it comes to measuring personal security risks, however, subjective indicators are required.