Health security is an important dimension of human security, as good health is “both essential and instrumental to human survival, livelihood and dignity” (Human Security Unit, 2013: 27). Good health of a population is also important for social cohesion and stability.

The importance of health and its impact on human security can be evaluated on the basis of four criteria: (1) The scale of the disease burden now and into the future; (2) The urgency for action; (3) The depth and extent of the impact on society; (4) The interdependencies or “externalities” that can exert ripple effects beyond particular diseases, persons or locations (CHS, 2003: 97). By applying these criteria to health security, three main threats to human security were identified: global infectious diseases, poverty-related threats, and violence and crisis – such as conflicts and natural disasters.

Apart from the above classification, it should be noted that there are other threats to health, which are closely related to other dimensions of human security, such as security of food and environmental security. Contamination of water, soil and food by pesticides and toxic chemicals such as mercury, lead and arsenic causes millions of poisoning cases annually (OECD/WHO, 2003). Research on the effect of genetically modified food on human health also shows that GMOs can have various consequences on health due to increased intake of non-nutritive substances, use of viral DNA, possible transfer of antibiotic resistant genes, as well as cause allergic responses (Dona & Arvanitoyannis, 2009). 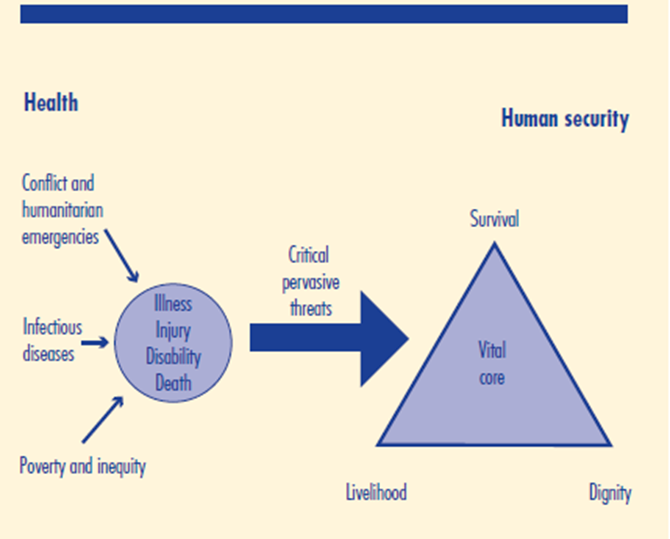 One of the biggest threats to global health and the “world’s leading infectious killer” is HIV/AIDS. An estimated 35 million people are infected with the virus today, out of which 3.2 million are children (younger than 15), and according to World Bank data, 39 million people have died from this disease since 1981, when the first case was registered (World Bank, 2013). Africa is the worst hit region, with 24.7 million people living with HIV, which represents 70% of all people living with the virus in the world. As well as having a high rate of mortality, HIV/AIDS profoundly affects the healthcare system, the family, education and social cohesion. Due to its high mortality and morbidity, HIV also affects the work force, and loss of ability impacts key sectors of the labour market. Research shows that the HIV/AIDS pandemic across Africa reduced average national economic growth rates from 2 to 4% (Dixon et al. 2002). Because of the consequences of HIV/AIDS on health, economy, human security and security in general, in 2000 the UN Security Council passed Resolution 1308, in which HIV was recognized as a risk to stability and security a “peaceful war against AIDS” was declared (Economic and Social Council Press Release ECOSOC/5884, 2000). This was the first time that the UN Security Council passed a resolution on non-military threats to security.

In addition to HIV/AIDS, major threats to health and security are also tuberculosis, malaria and outbreaks of infectious disease. According to WHO data from 2014, 1.5 million died from tuberculosis (out of which 0.4% were also HIV positive), and TB, along with HIV, has been one of the leading causes of death at the global level (UNICEF & WHO, 2015). According to WHO data from 2015, there were 214 million new cases of malaria worldwide, with the largest number of cases registered in Africa (88%). In 2015, malaria caused 438,000 deaths, with 90% of this number registered in Africa (WHO, 2015).

Another major health security problem are epidemics/pandemics of respiratory infections, such as the SARS virus in 2003, bird flu (H5N1) in 2004, swine flu (H1N1) in 2009, but also outbreaks of viral hemorrhagic fevers like Ebola. A massive spread of the Ebola virus happened in March 2014 across West Africa, particularly in Guinea, Liberia and Sierra Leone, killing 11300 people by 27 December 2015 (CDC, 2015). This epidemic is considered to be the biggest outbreak of Ebola in human history, and in 2014 the UN Security Council adopted Resolution 2177 confirming “that the unprecedented extent of the Ebola outbreak in Africa constitutes a threat to international peace and security” (UN Security Council Resolution 2177, 2014).

According to a WHO Report, 60% of annual deaths among children under five are associated with being underweight, while deficiency of minerals (such as iodine and iron) and vitamins (deficiency of Vitamin A cases blindness and death of millions of children every year) has a significant detrimental impact on the health of children and pregnant women. Environmental conditions, the key ones being water, sanitation and air pollution, contribute to the development of diseases in conditions of poverty. Lack of sanitation increases the transmission of excreta-related illnesses, including certain fecal-oral diseases such as cholera, soil-transmitted helminths (among them roundworms and hookworms), and water-based helminths. Another health threat related to poverty is air pollution. A large number of people in developing countries, more than 1.5 billion, are exposed to severe air pollution and high concentrations of sulphur dioxide, which cause 4 to 5 million new cases of chronic bronchitis annually (OECD/WHO, 2003). Poverty, poor sanitation, malnutrition, hunger and lack of clean drinking water contribute to spread of infectious disease, while on the other hand, disease and infections exacerbate poverty “creating a vicious cycle of illness and poverty” (CHS, 2003: 99).

Many studies explore the link between conflicts and health aspects of human security (ie.g Leaning, 2014) infectious disease epidemics, as illustrated in the UN Report A more secure world: Our shared responsibility: “poverty, infectious disease, environmental degradation and war feed one another in a deadly cycle” (United Nations, 2004: 15). According to the SIPRI Annual Report, between 2002 and 2011, there were 73 state-based conflicts, out of which 40% were in Africa and 165 non-state conflicts, out of which 76% were in Africa. (Neil, 2013:46; 52). It is estimated that more than 1.5 billion people today live in insecure regions affected by conflict. Conflicts cause substantial human casualties and destruction of healthcare system resources (see Figure 2).

Figure 2: Conceptual framework on the impact of armed conflict on health (Guha–Sapir & D’Aoust, 2010: 14) 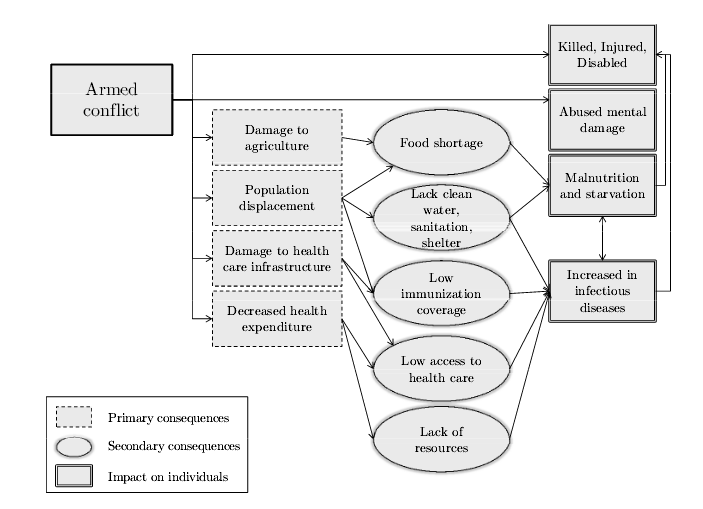 For example, in Afghanistan, malaria had been eliminated by the end of the 1970s, due to implementation of vector control programs. However, with the onset of civil war in 1978, which continued in the following decades, the healthcare system and vector control programs collapsed, resulting in the reemergence of malaria. Today, 50% of the population lives in malaria-endemic areas. However, after the introduction of artemisinin-based combination therapy in the national malaria treatment protocol in 2003, the number of cases dropped (Gayer et al. 2007: 1627).

During conflicts, and in other violent situations, biological agents may be used as weapons. Biological warfare was used in 2001, when anthrax spores were mailed to the US Congress. The Centre for Disease Control and Prevention identified 22 cases of anthrax poisoning, and there were 5 casualties (Das & Kataria, 2010: 225). 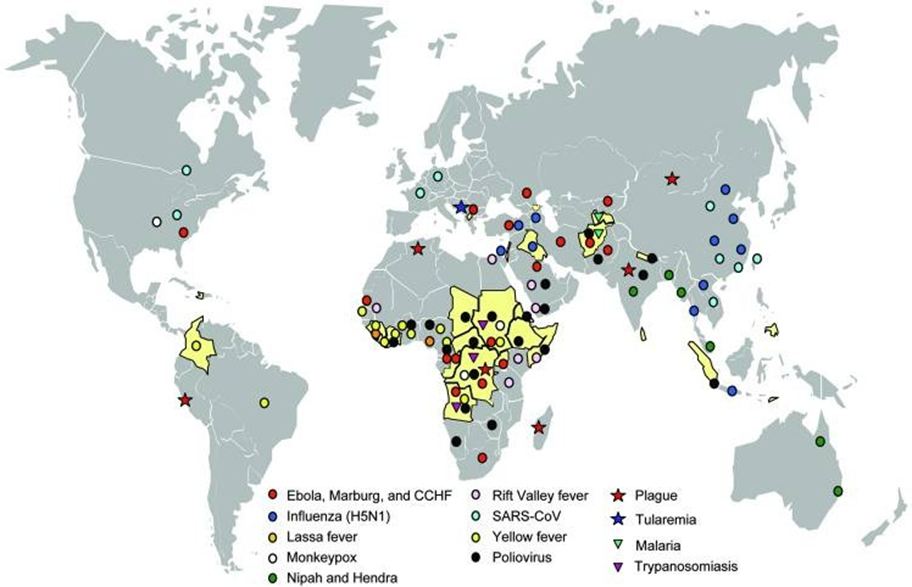 Natural disasters, such as tsunamis, hurricanes, drought, floods, earthquakes, volcano eruptions, landslides, forest fires, etc. all present major threats to health and human security. The WHO estimates that natural disasters result in 90 000 deaths annually, with about 160 million people worldwide being directly affected. Natural disasters directly impact human life and often destroy physical, biological and social environments, but also have long-term effects on human health, well-being and survival. Natural disasters like hurricane Katrina in 2005, the Haiti earthquake in 2010, floods in Pakistan in 2010, and the Japan earthquake in 2011 all had a drastic impact on human lives, health, economy and the environment.

An earthquake measuring 9 on the Richter Scale struck Japan on 11 March 2011, causing a tsunami, with waves up to 10m high. 15 891 people died in this disaster, while 2 500 are still missing. The earthquake and tsunami led to another disaster – release of radioactive material from the Fukushima nuclear power plant. It is estimated that release of radioactive material will have long-term health effects, primarily in terms of an increase in cancer rates (all solid cancers, leukaemia, thyroid cancer and female breast cancer), as well as other diseases, such as: thyroid diseases (nodules, dysfunction); visual impairment (lens opacities, cataracts); circulatory diseases; reproductive dysfunctions; teratogenic effects; heritable effects and other non-cancer effects (WHO, 2013).

The fact that health and human security are closely related and the significance of health in achieving human security is evidenced by the fact that several out of eight Millennium Development Goals involve health: eradicate extreme poverty and hunger (MDG 1); reduce child mortality (MDG 4); improve maternal health (MDG 4) and combat HIV/AIDS, malaria and other diseases (MDG 6). With the aim of achieving health security, many programs were launched, the international legal framework of the World Health Organization was revised, institutions were established, like the Global Fund to Fight AIDS, Tuberculosis, and Malaria and the Global Health Security Initiative; and strategic documents were adopted to fight major infectious diseases. In May 2014, the World Health Assembly passed a resolution in support of the Post-2015 Global TB Strategy, setting the goal of reducing TB mortality rates by 95% between 2015 and 2035. In May 2015, the WHO adopted the Global Technical Strategy for Malaria 2016–2030 aiming to globally reduce malaria incidence and mortality rates by at least 90%. In September 2015, the UN General Assembly adopted the 2030 Agenda for Sustainable Development, in which the international community pledged, among other things, to eliminate the AIDS epidemic, being a threat to public health. Many countries adopted strategies for fighting against HIV/AIDS and other infectious diseases, and at the same time, in their national security strategies, recognized infectious diseases and pandemics as threats not only to human security, but also to national and global security.