Stakeholders of the human security concept

The concept of stakeholders is used frequently in public policy, and represents parties interested in solving problems faced by the community. Stakeholders could include people, organizations and institutions which at that moment, or permanently, have an interest in participating in a policy, program, activity or organization. When the need arises to implement a project, action plan, or to map needs and identify sources of threats to security, the ideal is that all relevant stakeholders should be included in the process. Some stakeholders could stay low, and choose to be passive, and become a beneficiary of the public policy or projects. They can be distinguished by whether they have power and/or interest (Figure1). They can also be differentiated in keeping with the level at which they operate, as well as the policies they implement. According to levels at which they operate, they can be found at local, national and international level (Onuf, 1995), while policies they implement differentiate between stakeholders from the public, private and non-governmental sectors (see Table V).

Figure 1: Stakeholders according to power and/or interest 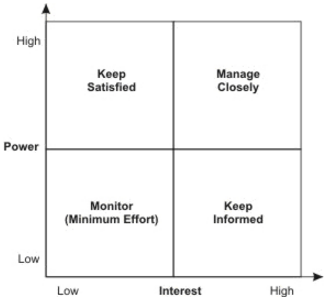 Stakeholder analysis is a process of identification of the most important actors from public, private or civil sectors who are involved in defining and implementing human security policies, and those who are users and beneficiaries of those policies. In addition to basic recognition, analysis like that also assesses power and interests of these actors, their reliance on each other and potential for partnerships.

When it comes to very complex policies or programs, their implementation can involve various stakeholders. In fact, considering that human security policies tend to be exceptionally complex, the principle of “multi-stakeholder partnerships“(MSP), (Heye Scheftel, Multi-Stakeholder Partnerships for Human Security) is often applied. Stakeholders can be key (having great significance or influence on policy success), primary ones (impacted by policy) and secondary (intermediaries, service providers, representative organizations and monitoring bodies) (Scheftel, 2009).

In the first instance this can apply to various ministries, and institutions relevant for their sectors (e.g. agencies for reconstruction and development and agencies for humanitarian aid). In addition, these can include non-governmental organizations on both local and national level.

We can classify them into several groups:

Media are important for implementing policies as they provide information on potential problems which threaten human security, or on improving security and quality of life for citizens. The academic community or individuals – experts in their fields – provide scientific and professional input based on results of theoretical and empirical research, point to deficiencies in the system, suggest the most efficient ways for their mitigation, and solve problems in this area.

The main difference between Human Security policy and other policies is that HS takes into consideration not only engagement of multiple stakeholders at different levels, but those who need to be protected. In its aim to provide good practices within each group it is important to look at all levels, because small communities and local groups are engaged in different areas and have different perspective on some issues. For example, in the case of refugee integration in local communities – integration policies have international repercussion but they need to be authorized at the national level, and implemented at the local level, usually by local NGOs and actors.

The implementation of a policy relevant for human security and stakeholders involved can be demonstrated with the following example. Humanitarian military interventions which are launched in response to threats to human security involve stakeholders who may roughly be divided into military and civilian-humanitarian, with neither being a solid group, but rather a collection of very different actors. Military forces come in various forms and may be subordinates of the UN, NATO or national command, and engaged with varying levels of mandate. Civilian-humanitarian stakeholders can be divided into three main groups: UN agencies (UNDP, UNICEF, UNHCR and others), ICRC and the broader Red Cross and Red Crescent movement, and international and national NGOs. UN and ICRC agencies are international organizations in the true sense of the word, as their authority is based on treaties signed by different states. These international legal instruments give UN and ICRC agencies specific mandates and operative procedures helping to keep their relationship with military forces clearly defined in numerous international documents, albeit not always simple, keeping in mind that national states always keep their right to interpret international treaties in their own ways.