With the development of the concept of human security, the need to construct a methodological instrument to allow comparison of the status of human security at an international level developed at the same time. The result of these endeavours was the establishment of the Human Security Index – HSI, the first version of which was created in 2008, and its enhanced version (HSI 2) (Hastings, 2010) released at the end of 2010.

232 countries have so far been included in human security research using the HS index. This type of research is very helpful when making comparisons at the global level (although data on each of the monitored indicators are not available in all countries). As opposed to usual quantitative research, which observes isolated parameters (e.g. only GDP per capita), HSI actually represents a composite index taking into account a large number of parameters, and based on these, ranks countries according to the current level of human security (the fact that a country has a greater GDP per capita does not necessarily mean that the level of economic security will be higher in this country if a high level of inequality in income distribution is recorded).

“For example, let’s look at the current largest economy, the USA. It is usually considered “developed.” Its Gross Domestic Product per capita ranks about 11th in the world…But the USA finds itself 140th of 232 ranked countries in Economic Fabric Index, 179th in Environmental Fabric Index, 99th in Social Fabric Index, and merely 147th of 232 countries in the composite Human Security Index. So the USA currently sits as a relatively low to middle rated society in delivering Human Security to its people.” (Source: www.humansecurityindex.org) 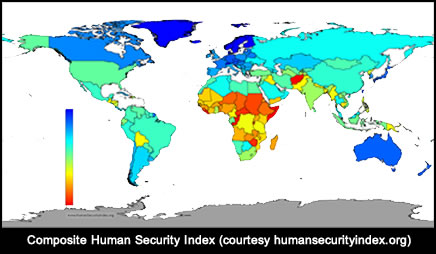 As in case of any other research method, HSI has its own advantages and disadvantages. According to Kanti Bajpai, an HSI could have at least five uses (Bajpai, 2000):

On the other side, there are certain challenges related to use of HSI as a measure of human security. For example, there is a dual problem of validity and reliability – different components of HSI must be valid representations of what they are each intended to represent, but also the various measures should be reliable, i.e. “they should be constructed in the same manner cross-nationally and cross-temporally so that the measure of human security is “stable” and therefore comparable across space and time” (Bajpai, 2000). Also, HSI is still an “objective” measure of human security and it needs to be supplemented with some other methods (for example with public opinion survey), in order to adequately interpret social reality (Ibid).

[2] About relationship between HS as a theoretical concept and as a policy tool see in Owen, T. (2004) Human Security – Conflict, Critique and Consensus: Colloqium Remarks and a Proposal for a Threshold-Based Definition, Security Dialogue, Vol. 35, No. 3, pp. 373-387.