The UNDP Human Development Report of 1994 introduces the concept of human security, which focuses on the people (UNDP 1994: 22). The same document points out that the term ‘security’ has long been interpreted too narrowly-used in the context of “security of territory from external aggression” and thus suggests that human security involves much more than just the absence of conflict. This formally shifts the emphasis from state security to human security. The report further qualifies human security as “safety from chronic threats such as hunger, disease, and repression as well as protection from sudden and harmful disruptions in the patterns of daily life – whether in homes, jobs or communities” (UNDP, 1994: 23).

The Commission on Human Security (CHS) was established in January 2001. The first report of this commission, Human Security Now, was published in 2003. According to this report, the concept of HS seeks to “protect the vital core of all human lives in ways that enhance human freedoms and human fulfillment “(CHS, 2003). This report adds the Freedom to Live in Dignity to the vital objectives of human security which thus means respecting the basic principles of democracy, rule of law and human rights and freedoms.

The efforts and initiatives of the UN, in the development of the concept of human security, were presented in the report A More Secure World (2004) at the UN Secretary General’s High-level Panel on Threats, Challenges and Change. It has been acknowledged that a wide range of threats exist, that threats endangering national security and the security of individuals are connected- and therefore there is a greater need for better cooperation in order to eliminate the aforementioned threats, and a greater necessity for approaches that will cover both human and national security issues (United Nations, 2004). 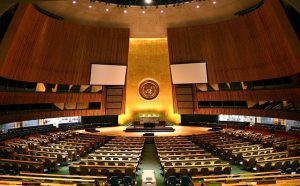 In the report In Larger Freedom: Towards Development, Security and Human Rights for All (2005), Freedom from Fear, Freedom from Deprivation and Freedom to Live in Dignity are given as the basic elements of human security. It emphasizes that security cannot be achieved without development and that conversely, development cannot be attained without security and neither of these can be achieved without respect of human rights. That same year, the UN General Assembly adopted The Outcome Document of the 2005 World Summit, which confirms in paragraph 143 (Outcome Document A / RES / 60/1) that: “all individuals, in particular vulnerable people, are entitled to Freedom from Fear and Freedom from Want, with an equal opportunity to enjoy their rights and fully develop their human potential” (General Assembly, 2005).

“The right of people to live in freedom and dignity, free from poverty and despair. All individuals, in particular vulnerable people, are entitled to Freedom from Fear and Freedom from Want, with an equal opportunity to enjoy all their rights and fully develop their human potential” (General Assembly, 2012).

General Assembly resolution 66/290 was an important milestone in the 20-year evolution of the implementation of human security within the UN system.