The Vital Core of Human Security

The Vital Core of human security represents a set of key interests, values and needs of people that need to be protected. The term ‘vital core’ appears as a fusion of two terms “vital interests” and “core values” (Baldwin, 1997 and Bajpai, 2000) and it appeared for the first time in the article of Sabina Alkire “A conceptual framework for Human Security” in 2003 [1].

The objective of human security is to safeguard the vital core of all human lives from critical pervasive threats, in a way that is consistent with long-term human fulfilment (Alkire, 2003).

The vital core refers to rights and freedoms that pertain to survival, to livelihood and basic dignity. It is a rudimentary but multidimensional set of human rights and human freedoms based in practical reason. It spans the freedom from fear and freedom from want and it needs to be specified by appropriate procedures in any given context (Alkire, 2003).

Thus, the idea of vital core attempts to encapsulate the level below which individuals are not able to lead tolerable lives. The availability of healthy food and clean water, a roof over one’s head, employment, a clean environment, public health and the freedom to worship are just some of the examples of the Vital Core. However, it is important to keep in mind that vital core is highly contextual – what prevents people to live tolerable lives depends upon the context as well as how people experience and perceive their insecurity. Due to this contextual relativity the concept sometimes lacks precision. This imprecision is often the reason why human security was seen as impractical or insufficiently defined in relation to traditional security or classic international relations between states.

Official discourses of the United Nations (0101) and European Union (0103) have developed in parallel with this conceptual discourse. Moreover, an expression of the Vital Core has been mentioned in the preamble for ‘Human Security Now’, the report which was signed by the Commission for Human Security.[2] The Commission’s definition of human security is: to protect the vital core of all human lives in ways that enhance human freedoms and human fulfilment (HS Now, 2013). 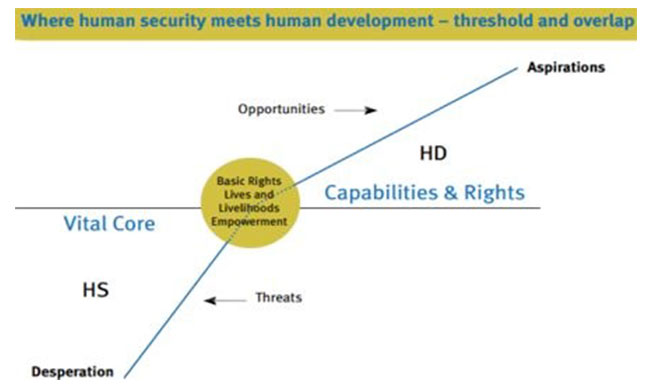